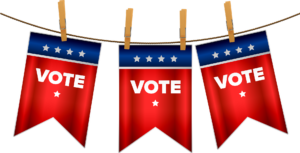 After watching last night’s presidential debate, I heard MSNBC commentator, Nicole Wallace, state that the debate was “abusive.”  I agree with Nicole and am saddened to see our once proud democracy go down in flames. What did Nicole mean when she said the debate was abusive?

Here are some of the red flags and warning signs of an abuser and include but are not limited to:

I admit that this president has successfully made me feel hopeless and totally out-of-control – but not anymore. After watching the presidential debate I am convinced that Trump is a sociopath-narcissistic, self-absorbed, dishonest man. Voters in 2016 knew what he was like and he was trounced by popular vote by 3 million votes. (Speaking of out-of-date, the electoral college needs to be demolished. Let the people speak!)

The one tool I have to keep me sane is my right to vote, and I will not let anyone take that right away from me. NEVER!

If you are feeling hopeless and terrified, please take action and vote. It is the only way we can find hope in our country.

This site uses Akismet to reduce spam. Learn how your comment data is processed.