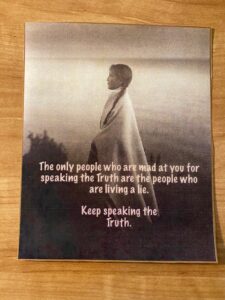 I received this picture and saying from a woman I greatly admire. In fact, this photo and saying are so touching that I wanted to share it with everyone I know. It has a very personal effect on me since some of my siblings have disowned me for speaking publicly about my childhood abuse. I am the only one in our family who admits that my father was the abuser, despite knowing some of my siblings were abused, too. (But that’s their story to tell. I can only write about my story.)

Telling the truth about an issue so despicable is never easy. After I survived Stage IV colon cancer, I finally learned that if I didn’t tell my personal story I was going to die. Sounds dramatic, but it’s the truth. What I learned was I had stuffed all my life’s trauma into my body, mind, and spirit, and the trauma dove deep inside my muscles, cells, organs, and bones. I could never understand why I had so many health conditions, that is until I was diagnosed with cancer – 3 times. In my research to find how I could survive a 6 percent chance of survival, I began to research and pray to keep living. My book, Never Give Up: Break the Connection Between Stress and Illness, helped me realize that I had the power to heal myself. (You can view this book on this website.)

Many of my siblings refused to believe and were angry that telling my story was a healing journey. They, in fact, thought I was seeking attention. They knew I’d been abused, but felt the truth should be hidden. Hiding that truth made me deathly ill. I struggled with telling the truth until cancer became a wake-up call for me. Now I believe that the siblings who disowned me are not liars but are living a lie. I never thought they would act against me.

My world has not come to an end and many of my cancers have come and gone making me extremely grateful. That is why I chose to tell the truth.

Alexis Acker-Halbur is an award-winning author and medical miracle. Child abuse made her seriously ill and put her in harm’s way numerous times. She survived and now shares her experiences and tools with women and men who have been traumatized. To order her tools for healing trauma book, Never Give Up: Break the Connection Between Stress and Illness, click here. If you would like to read her 2020 published fictional novel, THE BEAR: In the Middle of Between click here. I’d like to share with you a new tool I’ve created to help you understand and heal from abuse/trauma. All you have to do is click on this link and read the two charts Tools to Help You Heal.

The first chart reflects the negative effects that make you sick. Scroll down to the next chart to find the positive tools to help you heal.

You’ll be amazed to see how abuse/trauma can affect your mind, body, and spirit. Healing from abuse and trauma may seem daunting, but this chart can help you see the negative side of trauma and the positive side of healing.

Abuse and trauma can be healed and you can also begin healing by reading these charts and purchasing my T.R.U.T.H. workbook for just $25.00. (Special  50% discount.) You’ll  find new ways to heal. NOTE: Due to the coronavirus, T.R.U.T.H. Program groups will not be held until it is safe to gather. In the meantime, if you’d like to purchase this workbook, you can do so by contacting me at alexisackerhalbur@gmail.com. The cost of the manual and information packet is $25.00 plus shipping.

The Road to Unresolved Trauma Healing. This program puts you at the center of truth.

What topics does T.R.U.T.H. cover?

What type of activities are included?

Get you T.R.U.T.H. workbook today and never give up.

In a recent article in TIME magazine, Lyz Lenz wrote a brilliant article “Shouting Into the Void: How many personal stories must women share to convince others of their humanity?” I am moved by this article, so I want to share some of it with you, and then a few comments from me.

“Women have long been compelled to share their most private moments in order to convince others of their humanity.”

“As more men, including the President of the United States, have been publicly accused of assault and misconduct, and more states have passed laws that restrict our abilities to make decisions about our own health care, women have been repeatedly reminded of this country’s disregard for our bodily autonomy [independence] and indifference to the reality of our lives.”

I came out publicly years ago stating that I was sexually, physically, and emotionally abused by my father. I’m not the only one in our family, but I’ve chosen to let these siblings tell their own stories, yet, I needed to let go of this painful secret because it was causing my health and wellness to disintegrate. Yes, I became ill time after time because my mind, body, and spirit were overwhelmingly stressed due to the memories of my father and his abuse.

How many women must come forth and tell their stories until the world acknowledges that women are often abused and degraded every day by men? And it is not just in the U.S., women are harshly treated all over the globe. With online media, stories and stories of abuse are appearing daily, yet it does not seem like action is being taken to keep women safe.

I want to be safe in this life, and that means I do not want men to assume “I like” being abused and raped, because I do not!

“The President, who been accused of sexual misconduct by more than a dozen women, still sits in the White House, still overseeing a political system, still nominating judges to lifetime roles, stripping away our control over our own bodies. He’s denied all allegations, and the nation, by and large, has shrugged them off too.”

When powerful, rich men decide women are equal humans, we can get the dark secrets out in the open without feeling ashamed and start healing.

Thank you, Lyz Lenz, for your superb but sad article. Never Give Up, Lyz!!!

did not ask men to violate the bodies of women, nor did we ask men to create laws to punish us for our beliefs and constitution-given rights.

are human beings with minds, bodies, and beating hearts. The laws of this nation need to validate gender equality, and void male domination over females in every area of a woman’s life.

means, as women, we deserve identical respect as men and must never be treated as subservient.

are wives, mothers, grandmothers, sisters, children, friends, aunts, partners and spouses, regardless of what genes we possess and do not have, or what status we have attained or not.

are women who have been traumatized for centuries by men who seek the power to dominate and rule our lives with pain, punishment, and suffering.

are millions of women who want to be heard.

Men, why aren’t you listening?

I recently wrote this piece out of frustration for the way the rights of women are being violated. I may be frustrated, but I’ll NEVER GIVE UP! Are you bothered by the latest news on women rights? Let me know.

I’m creating a healing program for trauma survivors. It’s intense work but I know it will bring lots of healing to those of us who want to live healthier lives. In my research, I can’t believe how often I’m reminded of the No. 1 Abuse Myth: Forgive and Forget. I’m amazed at the number of articles, written by professionals, who state that “survivors should just forget their traumas and go on with their lives.”

If it were only that simple!

Surviving from trauma of all kinds is not easy. Whether the trauma is from abuse, attacks, war, illness, or divorce, traumatic events take up residence in our bones, cells, skin, muscles, and memory. You CAN’T just forget something because it’s awful. In fact, forgetting the trauma is impossible. We remember things that happen to us because it’s our body’s way of reminding us NOT to walk down dark alleys, give a stranger a ride, or trust someone we don’t know. Our bodies do warn us but if we don’t listen we’re apt to find ourselves in trouble – repeatedly.

When we remember the bad events in our lives, we are less likely to make the same mistake twice. We all make mistakes, it’s human nature, but when we ask survivors to forget we are asking them to be superhuman. Our bodies remember. Our minds remember. Our spirits remember. Healing comes from remembering the trauma and doing what we can to avoid repeat occurrences. We take self-defense courses, we go to therapy, we relocate, and/or we just get out of harm’s way. The words forgetting and repeating have a relationship since forgetting leads to the act of repeating.

So, if anyone asks you why you can’t just forgive and forget, ask them why they ask insensitive, dumb questions.

Remember to NEVER GIVE UP!!!